TESSA GILLARD and the THEATRE

RON BENDER:  This was from "Look Homeward Angel" (presented at KCI Feb'62) Our WODL Festival entry...I played Eugene Gant, a teenage boy (the play and the part of Eugene is based on a segment of the life of the author Thomas Wolfe)   In the play we are poor and my mother runs a boarding house at the turn of the century, inhabited by a lot of weird characters.  My father is an alcoholic, mother is a domineering frigid bitch..(Jo Van Fleet played the part on Broadway-who was sensational in those kinds of roles). I have a tubercular older brother whom I idolize and who dies early in the play. The play opens with in a spotlight seated at an outdoor table writing a tearful letter to his dead brother..(and if THAT doesn't kill ya right off the top of the play...nothing will!!)  Tessa played 'the older woman". LAURA JAMES and just "appears" at the boardinghouse looking for a room...She is very "nice", sweet and loving, and probably the only one who tries to understand Eugene and they fall in love and she seduces him. The mother catches on, is outraged, and orders the wanton woman out of her house...This is the final straw for , and he and Mother have this very emotional confrontation at the end of the play, and leaves home...and she is destroyed.! Very emotional play!  Of all the parts I have ever done, this is my favourite...and not because I won a silly award...There was a lot of ME...in that character.

Note:  Ron Bender won Best Actor for his role in Look Homeward Angel, given by The Western Ontario Drama League. 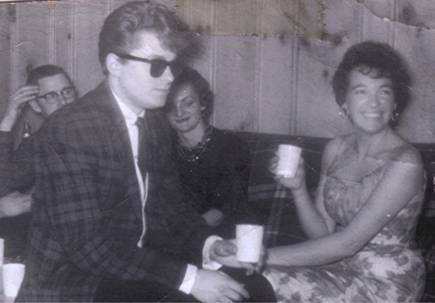 At the cast party of Look Homeward Angel.

And about those parties…  I remember a ten piece jazz band crammed into our living room, complete with upright bass.  My dad played the flugel horn so sweet it could make you weep. And all those glamorous theatre people…wearing their sunglasses at night.  ~smile~

RON BENDER:  Hi Darlin'!  I love that picture of your mother...and of course at this time I was hopelessly in love with her.  This picture was taken at one of the cast parties after one of the festival presentations of Look Homeward Angel ...I wasn't trying to look "theatrical" in those shades.  My grandmother had just died days before this was taken and because of all the stress of that and the stress of the festival, and lack of sleep...I had developed an eye infection. and was very sensitive to light. The seated lady with the dark dress, was Barbara Kelly...who was one of my classmates in grade school.  She married the guy who was originally cast in my part, Larry McIntyre...who used to be a sports announcer for CKCO, and I only got the part because the Dutchmen were in the finals of the hockey series, and he had to go out of town to comment on the games. The director wisely double-cast the part of and altho' I had little rehearsal time, I had all the lines memorized, and had all the moves down.  Not being a sports fan...I resorted to everything but voodoo, and prayer to make this happen....(Just kidding!) I got the part, about 3 weeks into rehearsal, even though the director thought I was all wrong for it, she didn’t like my delivery, or the fact that I wasn't tall and dark (like Tony Perkins who played the part on Broadway) but after I won that award...she told anybody who would listen that I was her big discovery and praised me to the heavens. Dear old lady, Blance Hogg.  I forgave her trespasses and we became close friends right up until her death in her late '80's.  I loved her dearly. 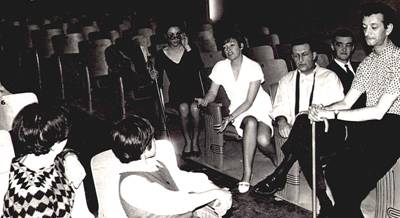 On the back of this picture, is says,
"Tessa Gillard, our director giving last minute instructions to members of her cast prior to dress rehearsal.
(front left) Terry and daughter Katrina. (others, left to right) Pam, Tessa, ?, ?, Ron Schell (affectionately known as Chicky)

And…about my mother directing plays.  Often, I would come home from school to find the living room completely void of furniture.  It showed up later, on stage, in time for opening night.

1966 – I remember it as being a spoof, with Leo Burns playing Romeo. 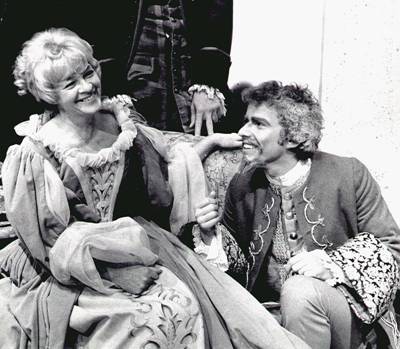 Looks like early seventies to me...performed at The University of Waterloo's Theatre of the Arts.   I remember watching this play, and gasping over the beauty of my Mum’s dress.  It was gorgeous…well, until I went backstage…and it was actually a rust corduroy, pretty haggard beat up thing.  God, I love the magic of theatre! 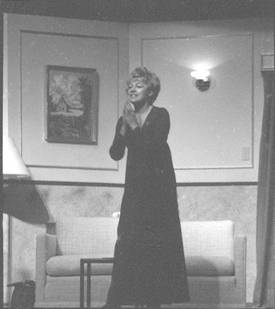 KWLT: The Patrick Pearse Motel, some time in the seventies.  Directed by David Antscherl.  Thanks for the picture, David.